I, too, want to be a daredevil!

I tried to be reasonable, the day after I had walked from the Giant’s Causeway along the coast to my hostel in Ballintoy, but those Irish people wouldn’t let me.

It was another day with typical Irish weather. Weather like everyone expects when coming to Ireland. Cold, windy and rainy. Fortunately enough I hadn’t experienced a lot of those typical Irish days while travelling, apart from that one in Malin Head, so I decided to have a quiet day. A short walk to the Carrick-a-Rede Rope Bridge, a lot of reading and working on my travel-diary was all I had planned. I waited for the rain to take a break and set off towards the bridge. It wasn’t far away from the hostel, just about 20 minutes by foot, so I soon passed the little hut that marked the beginning of the short walk to the bridge. Everything was abandoned, apart from a couple of workers, extending the tourist-facilities for the coming summer-season, and I went on for the last kilometre along the coast. 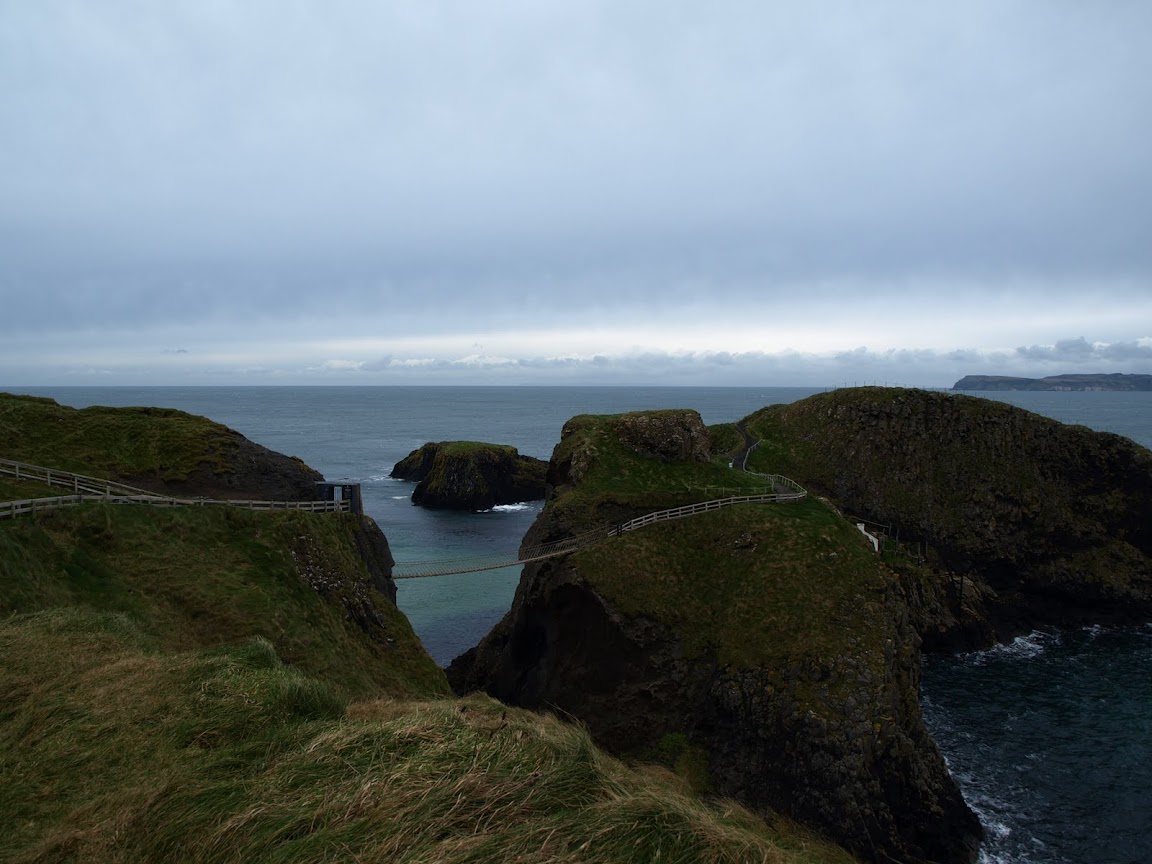 A fisherman’s way to work

I already knew that the bridge was closed until April. A couple of other tourists, equipped with travel-guides had told me about the taking-down of the bridge. Carrick-a-Rede is a rope-bridge to a small island, originally erected from salmon fishermen and used to get taken down every winter because of the rough weather-conditions. Now the salmons are gone and the bridge has become a tourist attraction. When I finally approached the bridge I was standing in front of a concrete door frame, blocked by a door of metal bars. On the right side of the frame the cliffs fell down over 20 meters, on the left side a huge rock blocked the sight down to the sea. The owner of my hostel had told me the day before that this was the first year in which the bridge hasn’t been taken down because of security-preparations on the island.

The rock on the left side looked inviting enough to climb it and from up there I could not only see the bridge without bars in my way, I also could step right to the edge of the cliffs, falling down to the sea. From the rock I could easily step on the doorframe and I wondered if I shouldn’t just climb down on the other side and cross the bridge on my own. Looking down I could see that I wouldn’t have a problem getting there, but wasn’t so sure about getting back up and over the frame. So I decided to be reasonable, follow the security warnings and head back to the hostel.

I was still fighting with myself about the lost opportunity when I met my hostel owner and his wife. The two of them were walking with their dog along the coast. He immediately approached me, asking how I’m doing and where I’m going. I told him about my walk to the bridge and that I had taken some pictures and was now heading home. He looked at me and smiled.

Ya’ know, some daredevils just climb over the door.

Then he turned around and followed his wife down the path. Some daredevils, that was all I needed. I too, turned around and headed back towards the bridge. The hut, the kilometre along the cliffs and a couple of minutes later I – again – stood in front of the door. Getting over it via the rock was easy enough and I finally walked over the bridge. While the old fishermen’s rope-bridge really consisted of just two ropes – one to stand on, the other one to hold on to – the modern bridge is completely safe, although the sight 25 meters down to the water is admittedly rather daunting. 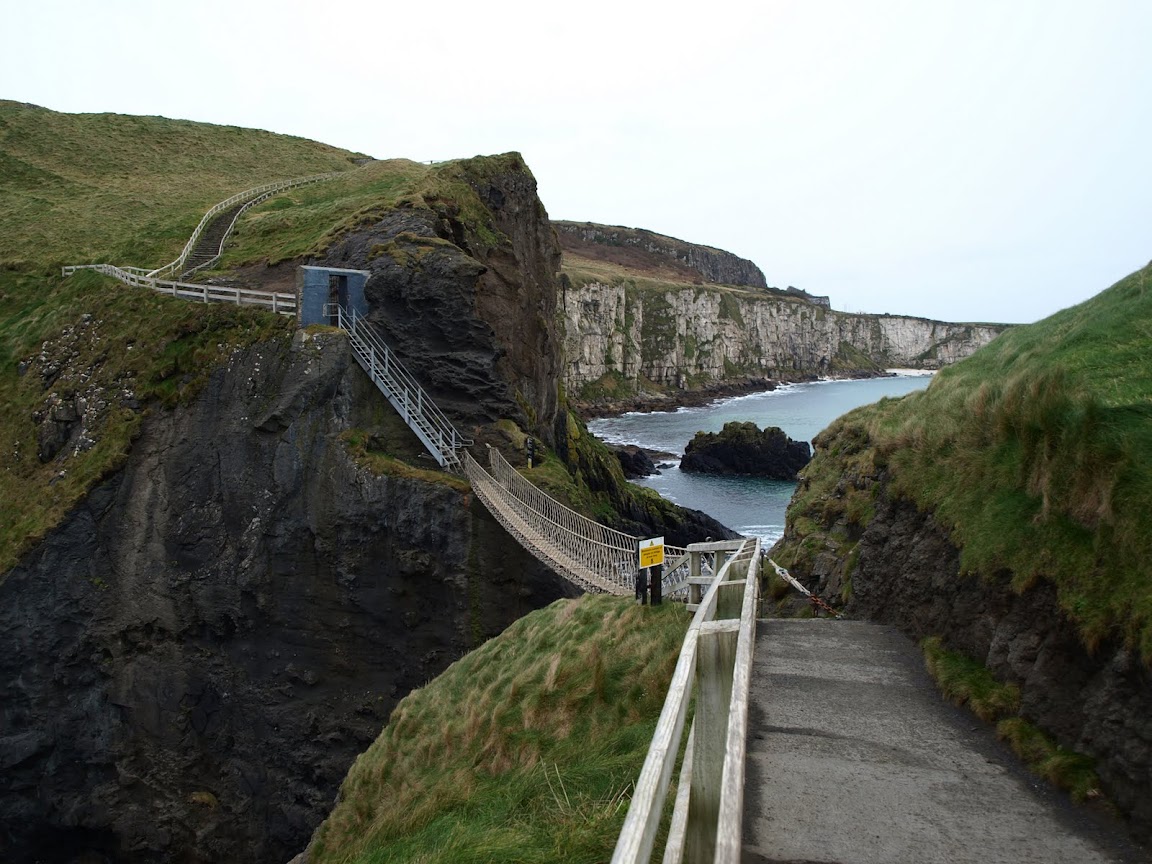 The island itself was tiny, green and empty. No sign of any security-preparations, I could walk right to the edge of the cliffs everywhere. While I took more pictures and failed to see Scotland at the misty horizon it started to rain again and the wind became stronger and stronger making walking back over the bridge even more shaky. Eventually I climbed back over the door.

I never talked to the hostel-owner about my dark daredevil-side, and only bragged a little bit in front of the two German girls, who stayed at the same hostel, invited me to the pub to get rid of their last British pounds that night and gave me a ride to Belfast at the next day. But that’s a completely different story.

This entry was posted in Ireland and Scotland, Travels and tagged Carric a rede, Northern Ireland, rain, rope bridge. Bookmark the permalink.