Through the first half of my Christmas travels Melmoth the Wanderer was a faithful companion. I had started with Maturin’s novel shortly before I left Limerick and had read it while waiting at the side of the road for my next lift, in parks and on ferries, in front of the open fire of the hostel on the Aran Islands and on top of Mount Errigal, the highest mountain in Ulster. The dark story about the devil’s servant on earth had made a stronger impression on me than books usually do and I can’t say if this was just a result of my own travels. Anyway, the story was even creeping into my dreams and always present in the back of my head while I was wandering Inis Mor, climbing ancient stone forts and church-ruins. But on one day in I was going to be accompanied by Melmoth in a slightly different way. 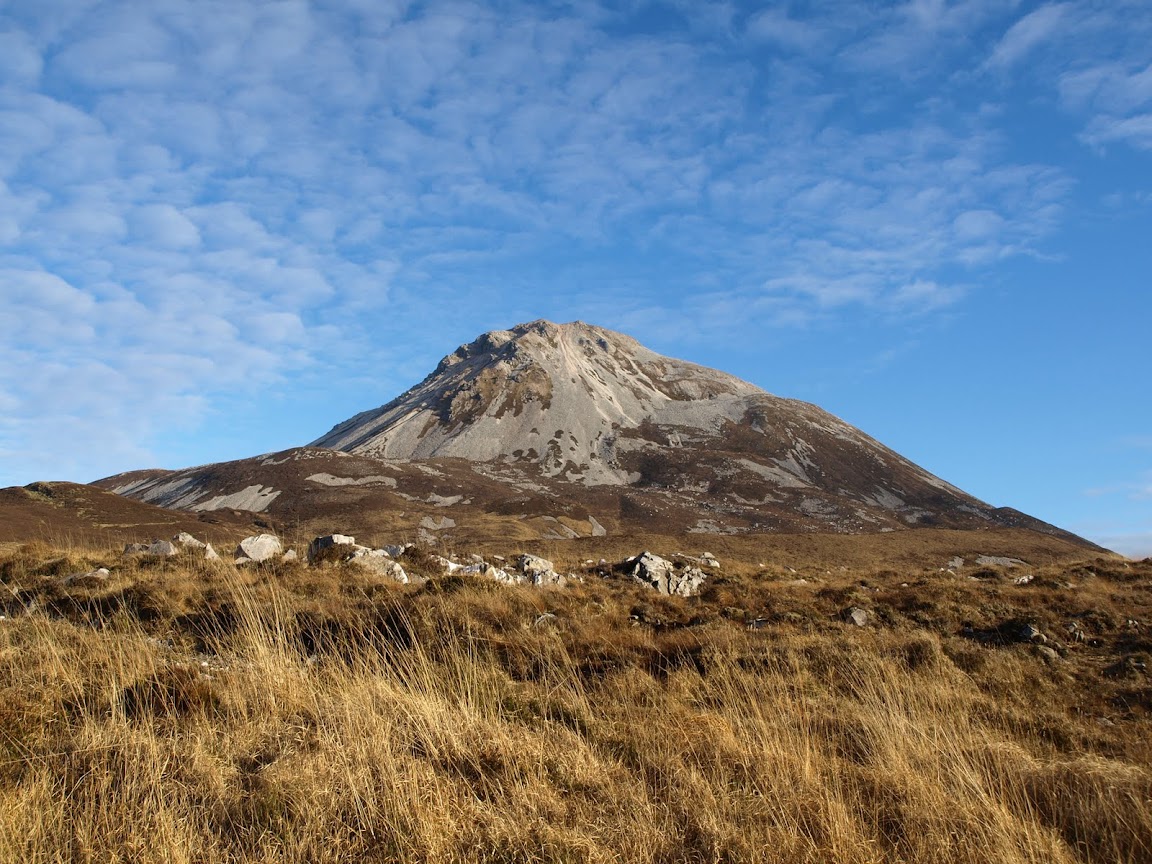 749m Mount Errigal proved too high for the day

It was in Donegal. For a couple of days I stayed in a big, brand new and completely empty hostel in Dunlewey at the foot of Mount Errigal. This day I set off at 9 am, ready to storm the top. Well, I was ready, but not prepared and failed miserably to find the path. After ten minutes I found myself in the middle of a meadow, completely surrounded by water. I had no idea how I managed to get there, but no matter what direction I tried, the water immediately filled my hiking boots. Eventually I found my way out, with wet feet and a seriously damaged spirit. I hadn’t made it farther than 50meters over my hostel and as my escape route went downhill I abandoned my plans to crest. Instead I decided to hike into the Poisoned Glen. And that’s where I met Melmoth.

My way towards the Glen ran along a couple of houses with gardens and dogs in all sizes. One thing they all had in common was the absence of closed garden-gates. At almost every house I passed an angry, nosy or playful but always barking and jumping dog rushed towards me, resulting in strange changes of walking-speed on my side. At the last house, placed shortly before the Glen, which opened up into a brown, muddy-looking valley, a black dog with white belly and white legs, of the perfect size, not big enough to be scary, but substantially bigger than those ratlike breeding-races, was lying on the lawn. He was watching me carefully, but was neither barking nor jumping nor running towards me. When I had passed his house, I wondered what was different about that dog, why he wasn’t acting as crazy as all those other dogs, especially after he had heard them barking for the last 10 minutes. So I turned around to have a final look at him before I advanced further into the valley.

I turned around and there he was, still lying on the grass, motionless. But something was different. He was about half the distance closer than before. Time for me to speed up again, but I hadn’t even turned back towards the valley, when he was already sprinting past me following the path I had planned to take. 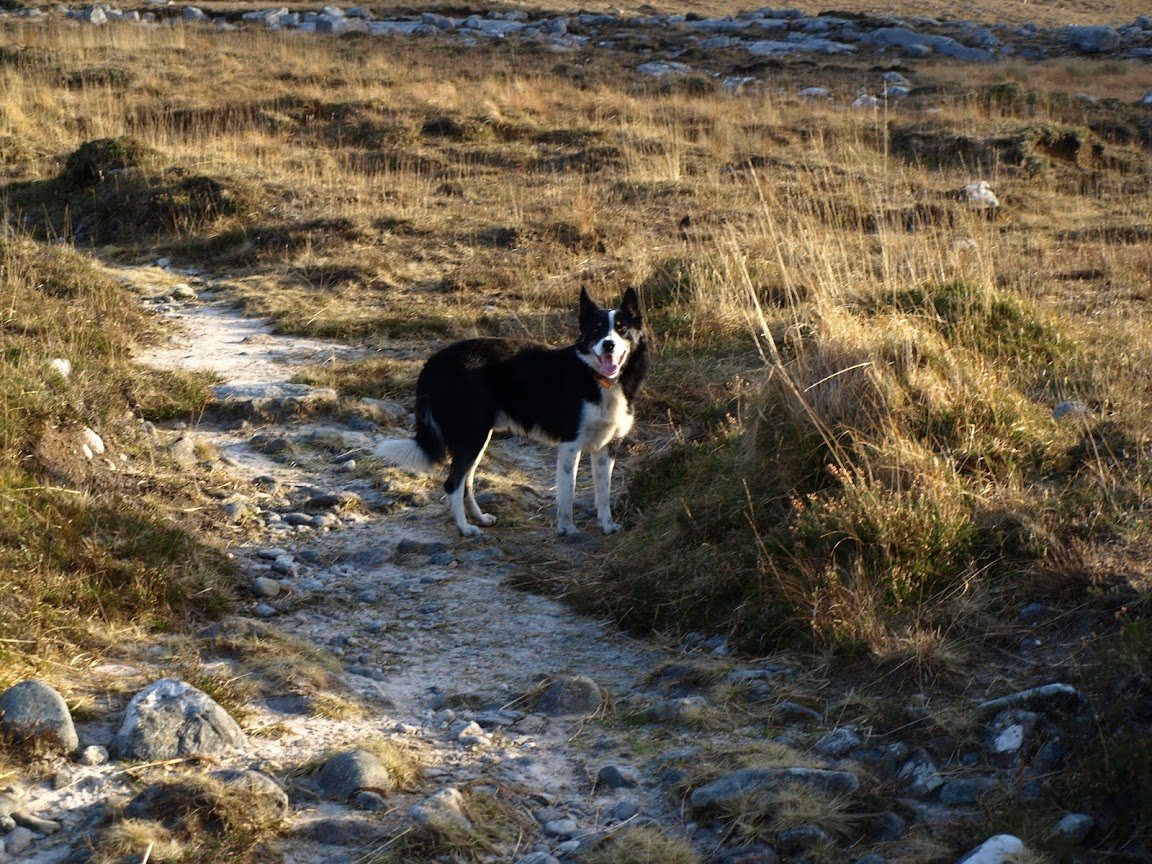 My companion Melmoth the Wanderer

I was seriously baffled, when he dashed past me, stood rooted to the ground, now motionless myself. This made him stop too, he turned around and waved his head, like saying “C’me on mate, let’s go!” And as soon as I started walking again, he ran ahead, making clear who was setting pace and route on that day. In the next two hours we walked together into the valley and up a hill on the side of it. Most of the time he would go far ahead or fall back, but he would always come back to me. He would go after sheep, chasing them up and down the hills (useless knowledge: a sheep can run downhill faster than a dog) but leave after a while to come back and check on me. I soon gave him the name Melmoth and maybe it was just my imagination, but I swear he listened to it.

After a couple of hours, we had made it up the hill bordering the valley to the west and for the first time took a break together, looking down at the Glen and Dunlewey Lough. On the way home, taking the short route by going down the steepest side of the hill, Melmoth refused to go ahead for the first time and I had to push him just a little bit. But we made it back to his house, where I walked backwards around the next bend of the road, pointing at him to make him stay. The last I saw of him, was his nose under the fence waiting for me to turn around so he could again follow me.

The next day I made it up to the top of  Mount Errigal and there finished reading Melmoth the Wanderer.
This entry was posted in Ireland and Scotland, Travels and tagged Donegal, Dunlewey, Ireland, Maturin, Melmoth, Mount Errigal, Travel. Bookmark the permalink.