In that last night, while I was signing coasters and Theo earned a new nickname, our host Johnny hit the pubs too. He played guitar with the Mulkerrin Brothers in the American Bar and later joined us for a couple of pints in Joe Mac’s, another pub. In the end we were all pissed, and so was Johnny. I shouldn’t see him sober again. 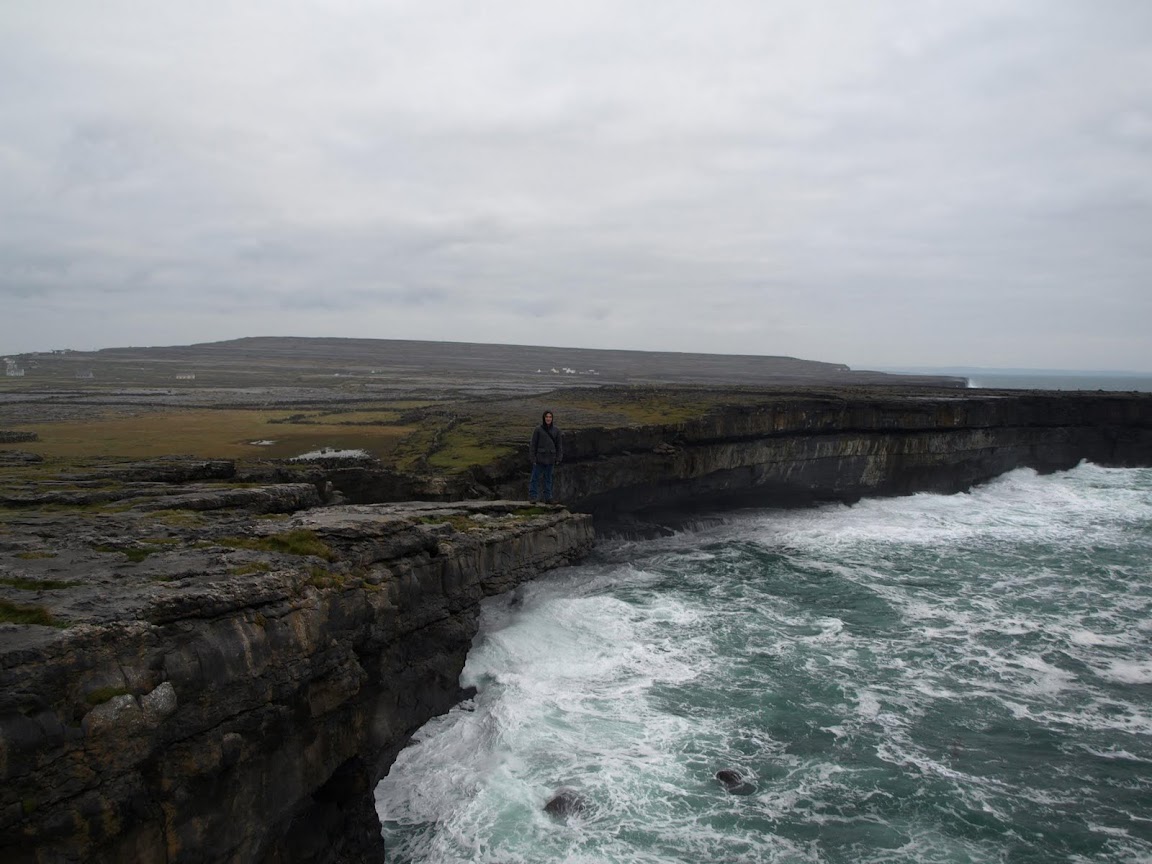 Looks rather stupid from this perspective

Theo had planned to leave the island the next morning but missed the ferry and had to stay until the afternoon. In the few days we had walked the whole island together. One of our walks led to the most spectacular archaeological sight of Inis Mor, maybe even of all Ireland. The ring fort Dun Aonghasa is believed to have been built in the Iron Ages. To get there you have to pay entry, walk up a hill and share the place with legions of tourists. Normally. We just walked through the open gate and had the whole place to ourselves. Dun Aonghasa is situated next to more than one hundred meter high cliffs. It looks like someone has cut off a third of the ground, leaving a clean edge on one side. If that place doesn’t give you vertigo, there must something wrong with you.

Shortly after Theo left a new guest arrived at The Artist Hostel. A guest Johnny was really looking forward to meet. He was especially intrigued by the name of the 20-year-old Australian student.

Bonnie Palmer, like a fuckin’ movie-star, he told everyone after reading her reservation-email.

It soon should show that the enthusiasm wasn’t mutual. Bonnie, who had studied in Dublin, was welcomed by a drunken old Irish guy who didn’t exactly hide his interest. After showing her around, he grabbed me and pulled me into the living room. His face close to mine he whispered:

Stay away from her! I’ve seen her first.

And he was serious. A little later he told the Belgian guest An to look out for her boyfriend Peter, because he might go after Bonnie too, then turned away, uttering:

I don’t like ya. You’ll take her away from me too.

An and Peter fled to the pub.

I was reading in the leaving room, but when I heard Johnny asking Bonnie for the fourth time where she is from and what she is doing I decided to join them in the kitchen. Holding on to a cup of tea Bonnie was leaning against the sink with Johnny standing next to her, talking and trying to move closer and closer, ignoring her obvious discomfort. Before they could complete a circle around the kitchen table where I was sitting, I asked her if she was up for a pint with the Belgians. She seemed really relieved when we were leaving.

We found the Belgians in Joe Mac’s and after another couple of hours with Guinness (a sudden short appearance of Johnny next to us) and singing Islanders it was about 2.00 am when I noticed Bonnie almost falling asleep at the table. That she not wanted to be alone in the hostel with the drunken Irishman wasn’t exactly a difficult conclusion, it still took me a while. Well, blame it on the beer. But eventually I asked her if she wanted to go home. 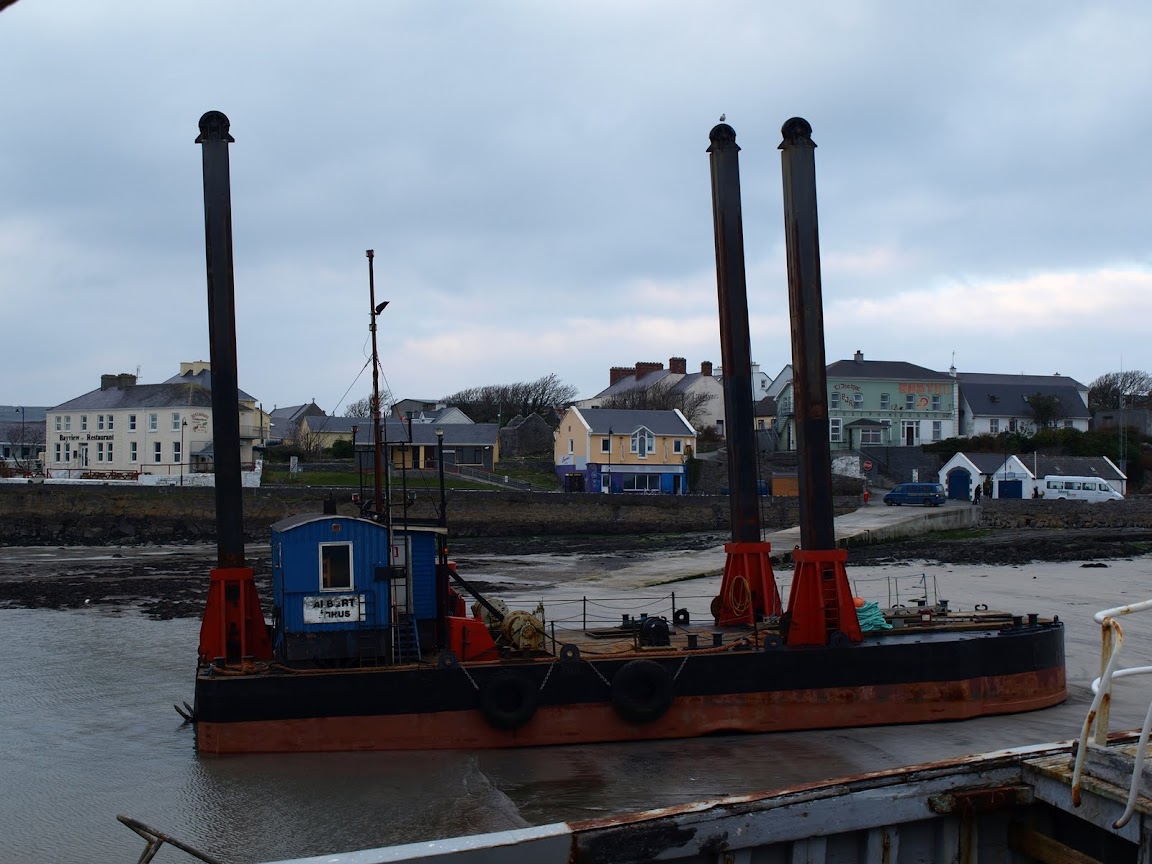 Where the ferry lands and leaves

Leaving the Belgians where we had found them, Bonnie and I went back to the hostel. It was dark but there was light at the end of the way. The kitchen of the Artist’s Hostel. On the way there we had talked about Johnny hopefully sleeping already. Guess what, he wasn’t. To reach the entrance of the hostel you have to pass the kitchen window and there he was. Sitting at the table, with a cup of tea and talking and gesturing to himself. Or so it seemed.

Now I had met Johnny as an extremely nice, entertaining and, maybe most importantly, sober guy. A great musician with an abundance of stories about the people on the island he was a great host. So I looked a little bit different on what we saw through that window than Bonnie, who had never experienced these qualities. And entering the kitchen didn’t help.

Hey guys. Have you met ‘em, he said, pointing at the two empty chairs next to him.

Without a word Bonnie disappeared in the dorm room. I stayed and was introduced to the two women he was talking to. Always being better with faces than names this wasn’t an ideal situation for me, so after a while I retreated too.

Some time later Johnny knocked at the dorm room, whispering my name. Back in the kitchen he told me he needed money. I hadn’t paid for my stay, but wasn’t sure if he would remember later and therefore offered to pay half of what I owed.

Writing it now it seems he wanted me to lend him some. But back then I just convinced him to let me pay half of what I owed.

The next morning Johnny was gone. He had taken the first ferry to go to a funeral in Donegal. An, Peter, Bonnie and me were left alone in the hostel. I stayed for two more days, peaceful but also somehow boring, and then left, leaving an envelope with the rest of the money on the kitchen table. There was no one I could have given it to.

This entry was posted in Ireland and Scotland, Travels and tagged Guinness, Inis Mor, Ireland, Joe Mac's. Bookmark the permalink.