When Tony had left to look after his horse he was replaced by John, another Irishman from Dublin. A musician and gifted teller of all sorts of stories (but not a ‘storyteller’ in the primary sense) he was to be our host for the next couple of days. And he was sober… for now. 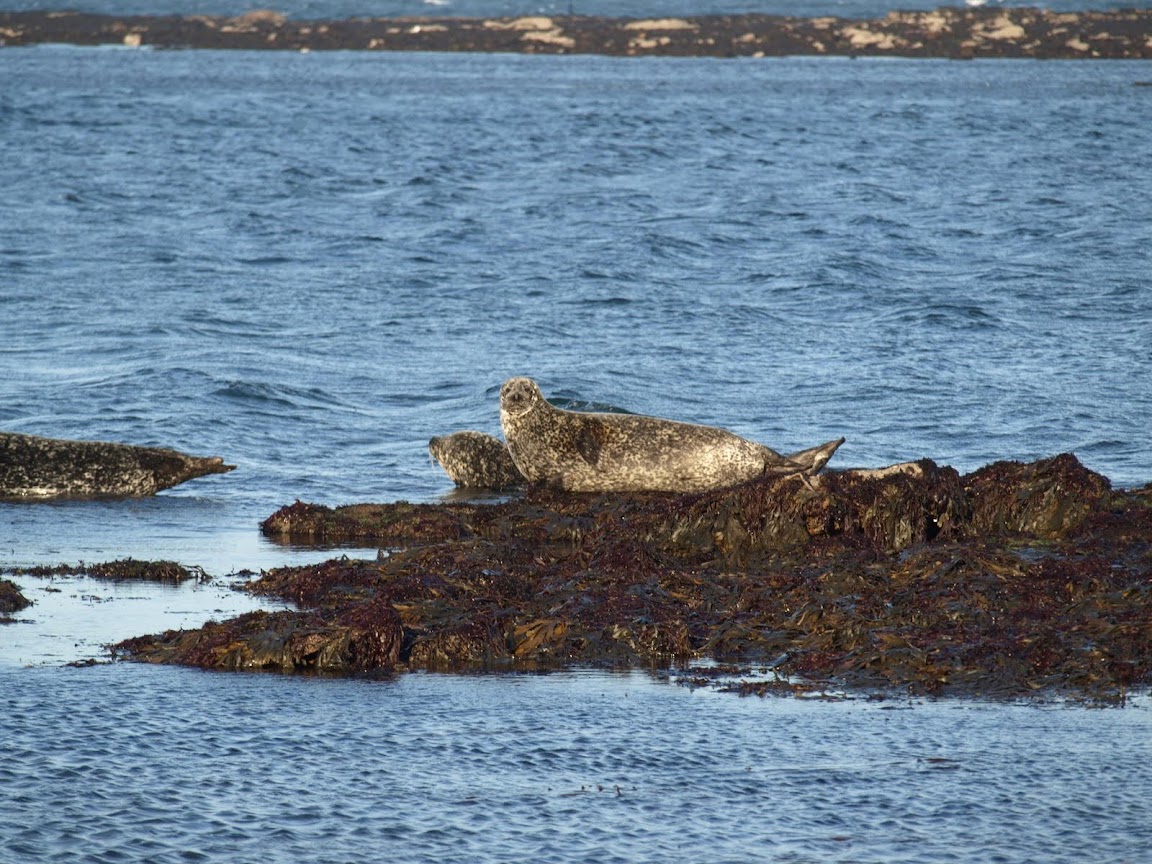 Some of the less clingy animals

Besides me The Artist Hostel housed a Belgian couple and an American Student. Peter, a Klezmer musician, and his girlfriend An, a storyteller, photographer and puppet builder, were slightly older than I and Theo who studied in Italy for the year. The whole group was completed by an old white-haired woman I never learned the name of. As a neighbour living in a mobile home she used the bathrooms, the kitchen and the washing machine of the hostel and appeared whenever the fireplace was lighted. There might be some mystical connection here…

On Christmas Eve, after spending the day exploring the island with Theo Peter and An cooked dinner for us. They had met a guy in the pub the day before who had promised (and delivered) them fish and a traditional receipt. Very salty, but also very good. Afterwards Johnny played and sang some songs on the guitar in front of the fireplace before we moved into the pub. There we had our first big entry.

In times of no-ferry-connection tourists are not a very common sight on Inis Mor. The usual response we got is best described by how a slightly drunk old guy approached us in the pub.

And what are ye fuckin’ Americans doin’ on the fuckin’ island on Christmas?

None of us had a good answer to that.

My hostel-mates where great company, we talked, laughed a lot and drank even more Guinness. The pub was full of locals, no seat was empty and they sang in turns. I already mentioned that practice when I wrote about my twenty minutes of fame (that actually happened two days after Christmas, fuck chronology) but it’s worth telling you more about.

Imagine a normal pub, a lot of booze, a lot of noise and suddenly you here someone shout.

Aoife, in the middle of a conversation, shakes her head, but it’s too late. More and more people catch on.

Come on Aoife! Just one! Sing something, Aoife!

Aoife is still reluctant, but she probably knows she doesn’t stand a chance. The whole pub is now looking at here, asking her to sing. Finally she grabs the hand of the person besides her. Everyone goes quiet. You hear only one voice, no music.

After she is done, people cheer, shout and eventually get back to their conversations until someone goes again.

We soon learned that the longer someone has to be asked, the better he or she usually is. And that those, mostly men, who just start singing on their own, are usually the most drunk. But no matter how good one is, once the singing starts people shut up and listen. I heard men and women, old and young sing in Irish and English, always grabbing the person next to them, their hands going up and down in circles (I was told that has something to do with the rhythm). Even we tourists were asked at one point, no problem for the musician Peter and Theo also sang, but I couldn’t get over that barrier inside my head. It’s a shame because I think it’s great how natural music comes to these people. No wonder the Irish are so gifted talkers, if you grow up with singing solo in pubs full of drunken people talking can’t be much of a problem.

A flyer on the wall next to our table invited us to another Irish tradition. On Christmas Day all over Ireland people go swimming in the sea for a good cause. Or as our by now more than just slightly drunk old friend called it ball-shrinking for charity. I wasn’t able to find out though how exactly charity benefits from that. Anyway, Theo and I missed that event when we went looking for an old stone fort the next morning, maybe there was our subconscious at work. 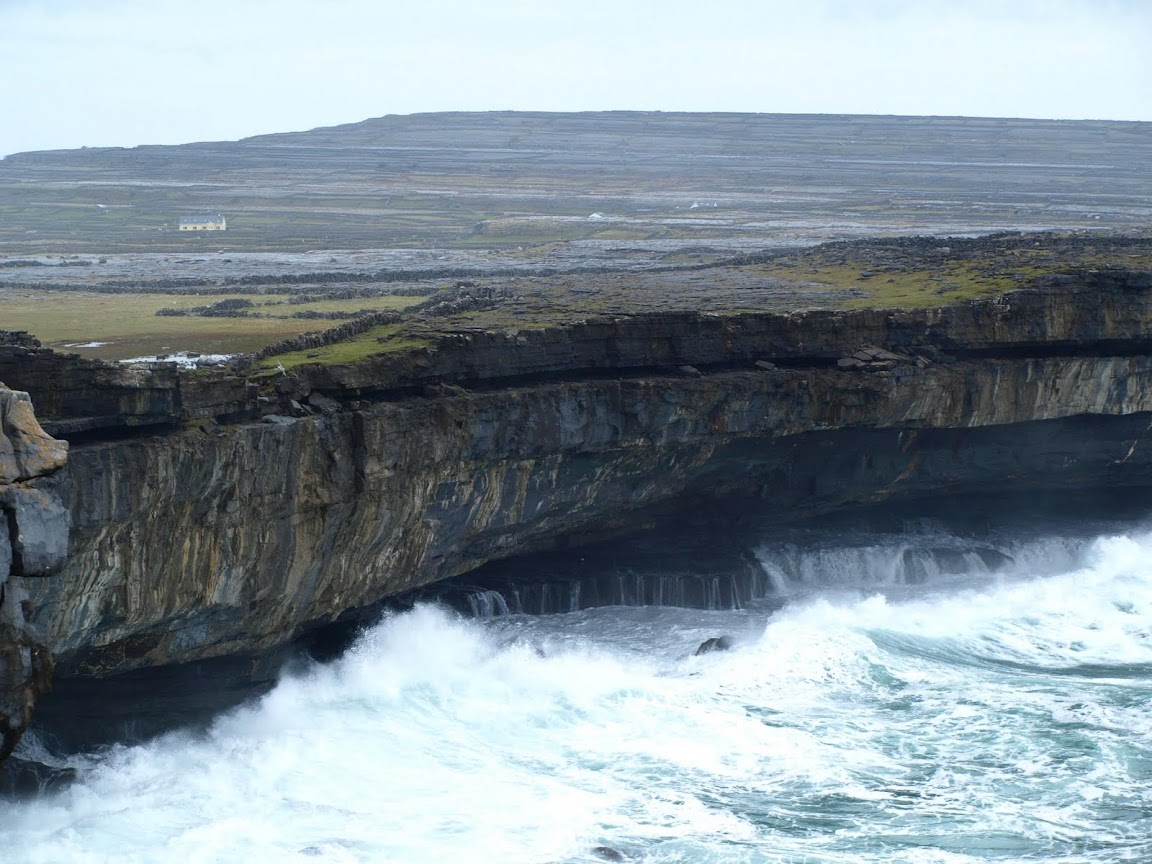 Looking underneath the island

It took us hours and a walk around half of the island along spectacular cliffs to find Dún Dúchathair, the ‘Black Fort’. Climbing up and down the rocks and crossing 500 stone walls (and least that’s how it felt) was exhausting enough and on the way back one of those walls brought about my downfall. Jumping down I twisted my ankle and, having some experience with torn ligaments, could feel something snap. Back in the hostel my foot was already twice its normal size. The next day I spent in the hostel (Ok, I did go to the pub at night, but you do know that story already. Let’s just say it was magical) and the next three weeks I ran around with a bandaged foot.

But the story isn’t going to turn boring just because I was knocked out. Entry Theo, the goat whisperer.

My American hostel-mate decided to go for a walk along the coast. At night. And already on the way back to the hostel Theo heard a sound behind him. He turned around and looked at a goat. Not a big story on Inis Mor, an island full of animals. I saw sheep (though not that many as one might expect), horses, donkeys, chickens and roosters, dogs, cats and even some seals. But this special goat somehow fell for the big baseball player from Pennsylvania and started following him. Now, there isn’t much street lightning on Inis Mor which means it was pretty dark. And being on the high road (literally, there are only two roads, a low road and a high road on Inis Mor) all the traffic to the pub had to pass the two of them. So, worrying for her safety, Theo pushed his new friend off the narrow street every time a car came by. Until he found himself caught in middle of the spotlights of two cars. One of them opened the window.

Is that your goat?

He explained his problem to a car full of young men on their way to the pub, who, after much laughter, offered him a lift and thereby freed him from his follower. Or so he thought.

Later in the pub, while I was signing autographs, Theo started talking to a bunch of girls. After a while one of them got hold of his camera and flipped through the pictures. Suddenly she burst out laughing.

The story had already spread.

Still to come: The last part of my Christmas trilogy. The big finale, what happened when Johnny wasn’t sober anymore and what did we actually see through that kitchen-window? Missed the first part?

This entry was posted in Ireland and Scotland, Travels and tagged Christmas, Guinness, Inis Mor, Ireland, pub. Bookmark the permalink.