Week 2 in Argentina: Lotion, Wine and a Climax

I left you in the bus from Bariloche to Mendoza. You might remember the rather slushy description of the passing landscape and there is really not much more to say about it. In Mendoza I had two hours to change to the bus to Uspallata where I was going to stay for the next two nights. I had run out of money again, so I went looking for an ATM, which never seems to go smooth. All the machines at the bus station were out of order, so I decided to walk towards the city. Looking for a bank I walked into a pedestrian tunnel when a woman hold me back. She pointed at the back of my arm and the sky. White stains spread from my backpack onto my arm and being from Vienna which is full of pigeons I blamed it on nature. I thanked the woman and turned around to go to the bathroom at the bus station to clean myself up. The woman hold me back again. Waving a pack of tissues she started to wipe me clean. The whole situation obviously looked bad. When she started to pull at my smaller backpack my alarm went off for good. No, no, gracias, baño, baño, I uttered, grabbed my stuff firmly and fled the scene. At the bathroom my fears proved true, Mendoza’s birds were wrongly accused, unless they drop body lotion. 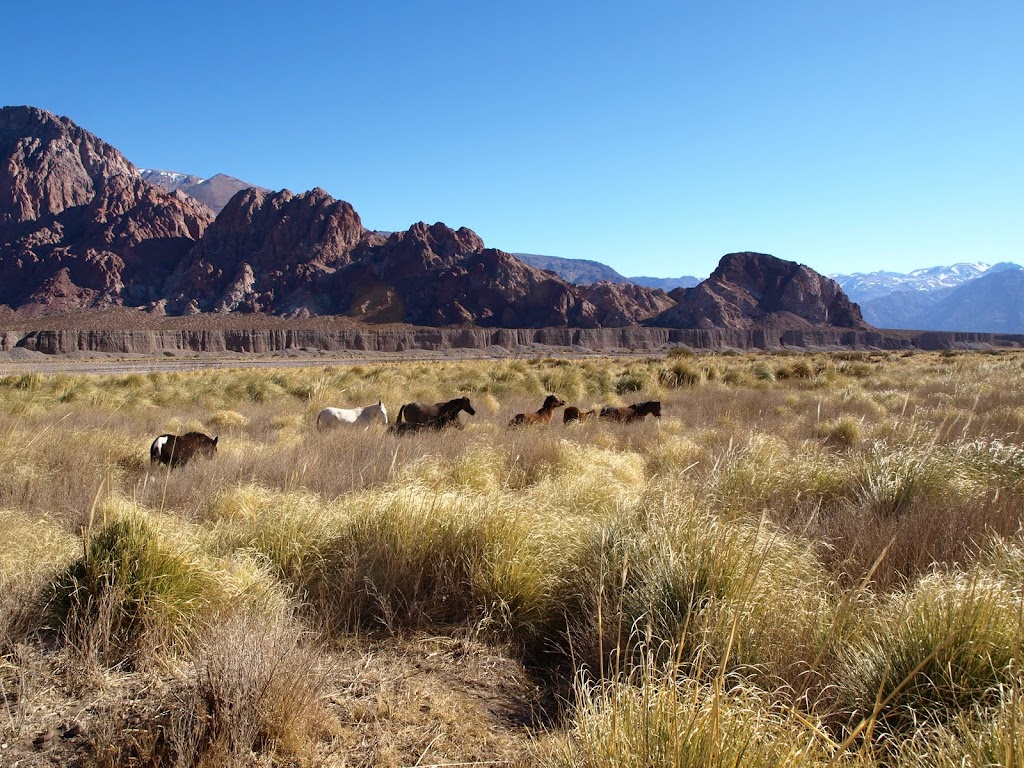 A track, not made for humans

I decided not to try my luck, parked myself at the platform to Uspallata and waited. Four hours and a two hour bus ride through another amazing scenery later I arrived at the International Hostel Uspallata. The owner took me in his car to the town centre, I got money and bought food (pasta again) and walked the six km back to the hostel. Then I walked a couple of hours around the Rio Mendoza on a path through man-high yellow grass that later turned out to be a trail of wild-running horses (fortunately the herd of six or seven heads just fled when they saw me coming), climbed some rocks to take pictures of cactuses and returned to the hostel for dinner.

The the evening became interesting. Uspallata is a plateau on 1800 metres and as soon as the sun went down it became cold. Really cold.  The hostel had two common rooms, the foyer, occupied by family and friends of the hostel owner with a shouting TV, and the kitchen in the back. The first was heated by a small stove, the second wasn’t heated at all. While I was eating in the cold kitchen two Argentinian girls arrived back from their day-trip. One of them introduced herself as Elisa and went out to get wood for the big fireplace in the kitchen. After she came back the hostel owner entered the stage. The next half hour happened completely in Spanish, so I don’t really know what was going on. Apparently the hostel owner didn’t want them to use his fire-wood, unless they paid for it. Elisa wasn’t going to accept that. A lot of increasingly angry Spanish words and even a few tears later the guy backed down and started lighting a fire. For the rest of the night he continued coming back to the kitchen and from time to time the argument started up again (at least it seemed like that, remember, I don’t speak Spanish). However in the end he presented the girls two bars of chocolate and asked Elisa to marry him (she told him he would be too old).

I spent the night in front of the fire, talking to Elisa and Lucia and drinking their wine. We talked about literature, philosophy, religion, politics and psychology. Kafka, Freud, Sartre, Nietzsche are some of the names, god and mysticism, the social construction of gender and Argentinian politics some of the topics that popped up during the night. The fire was hot, the wine was great and the company even better… everything had turned out great. 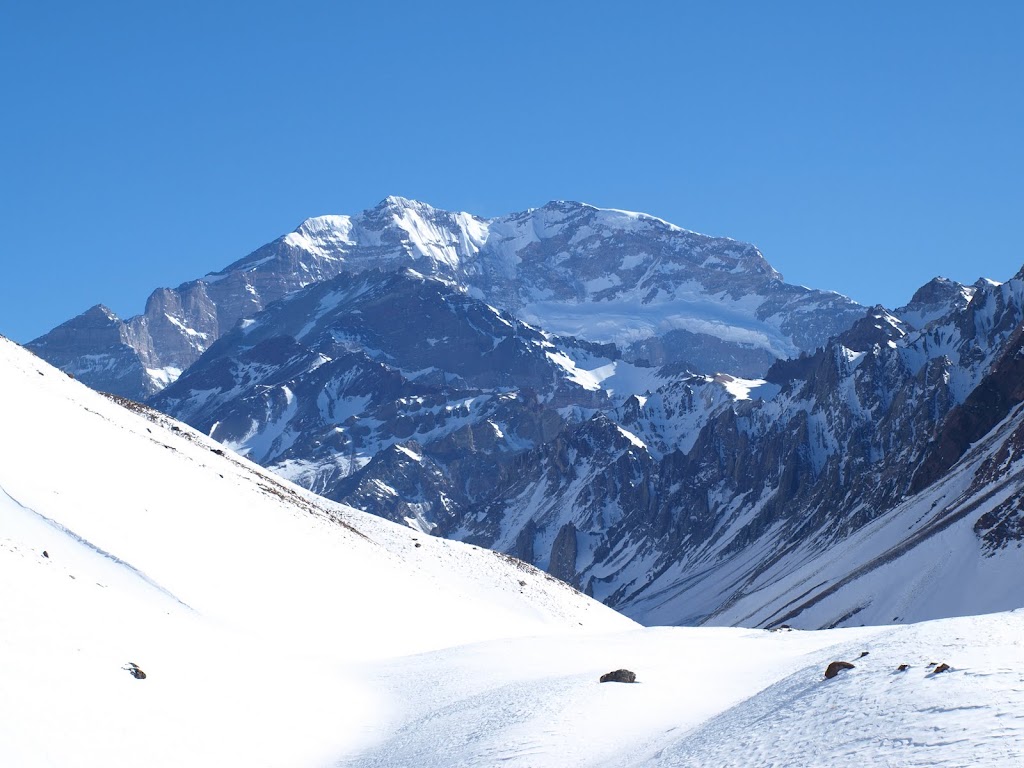 The highest mountain on the continent

The next morning Lucia and I got up early to catch the bus to the Parque Provincial Aconcagua and the Puente del Inca. Elisa stayed in bed, she was going to take a different bus to the next hostel the girls were going as she had seen both earlier. We waited for a long time in front of the hostel, 45 minutes maybe an hour and it was freezing. Not just freezing but really, really cold. I’ve never felt that cold in my life, despite multiple layer of really warm clothes. But the rest of the day proved to be worth the troubles once again.

First we walked about two hours around the Parque on (and through) one meter deep snow, with amazing views on the 6962 meter high mountain. On 2800 meter the sun at the perfectly blue sky was incredibly strong and kept us warm. Then we walked three kilometres down to the Puente del Inca. On the way we left the road to take some pictures at an old empty bus that could have been used for the movie Into the Wild. After doing that we had to cross a railway bridge of an old closed line (that used to go to Chile). Most of the bridge consisted only of the metal frame, fortunately neither of us is seriously scared of height.

Puente del Inca is a naturally emerged bridge (just google for the details) over a little valley and the site of hot springs. In the early 1900s a hotel was built above and a bathing complex into the walls of the valley. In the 1960s a flood of rain and mud destroyed the hostel completely, leaving only a little church unharmed. Today it is a tourist spot where you can only look down from the edge of the valley. At this time of year the bridge is decorated with hundreds of icicles, a really impressing sight. The remains of the bathing complex look like an old western-prison and the adjoining rocks are colored yellow and green by the hot springs. It simply looks amazing. 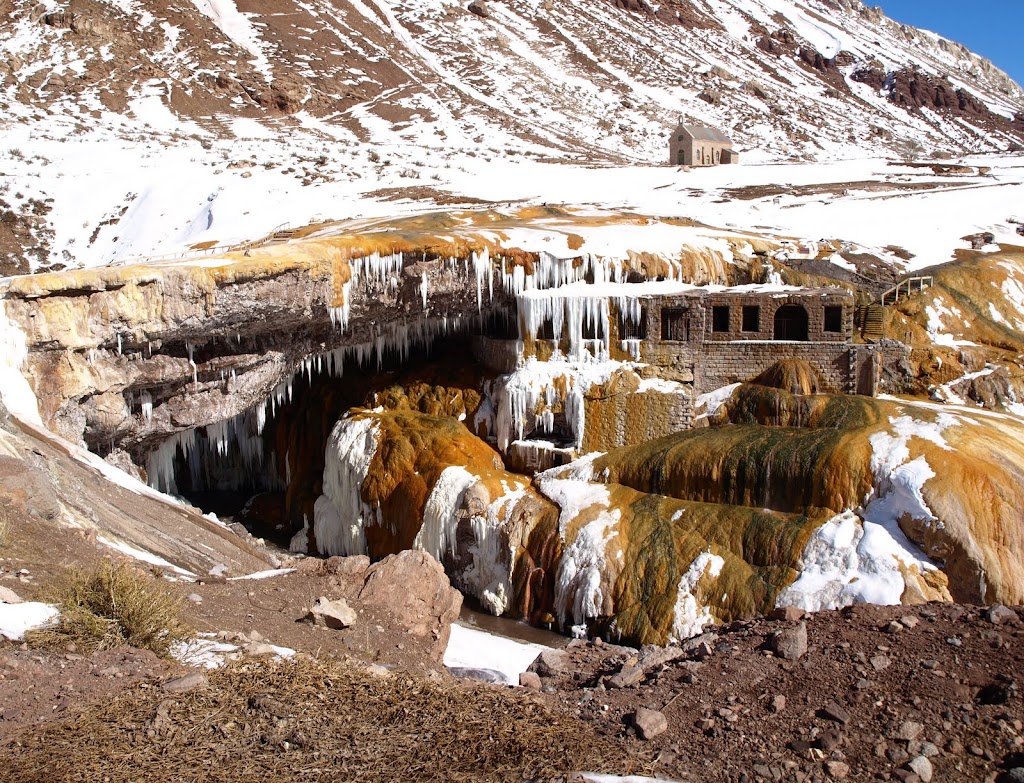 The remnants of a spa

After lunch in one of the cafes we had another hour until our bus left so we visited a little snow-covered remembrance cemetry for the mountaineers that died on the Aconcagua. We found a lot of German inscriptions, even one by the Steirischen Bergrettung (‘Styrian mountain rescue service’). The bus ride home took longer than expected but gave more time to view the amazing scenery, give Lucia the chance to teach me some proper Argentinian pronounciation and in return teach her some German.

Back home at the hostel I left the bus on my own, Lucia followed Elisa to their next hostel. This night I lacked fire, wine and company. The first thing the hostel owner told me when I came home was to come to the foyer if I’m cold and the last thing he asked me before I left the next day was if I had been cold. A couple of hours later I’m now sitting in another hostel, this time in Mendoza and have to finish typing, because a queue starts to form behind me.
This entry was posted in South America, Travels and tagged Aconcagua, Argentina, Cold, hiking, Mendoza, Travel, Uspallata. Bookmark the permalink.

1 Response to Week 2 in Argentina: Lotion, Wine and a Climax