Week 4: 10 lessons I learned at the Machu Picchu

“Why you shouldn’t go to Machu Picchu” is the title of an article I wrote into my notebook after a tour took me to Aguas Calientes at the foot of Machu Picchu and one night before I actually went up to see it. But visiting this amazing place changed everything. Go there! To spare you my initial frustration I want to share some lessons I’ve learned with you. 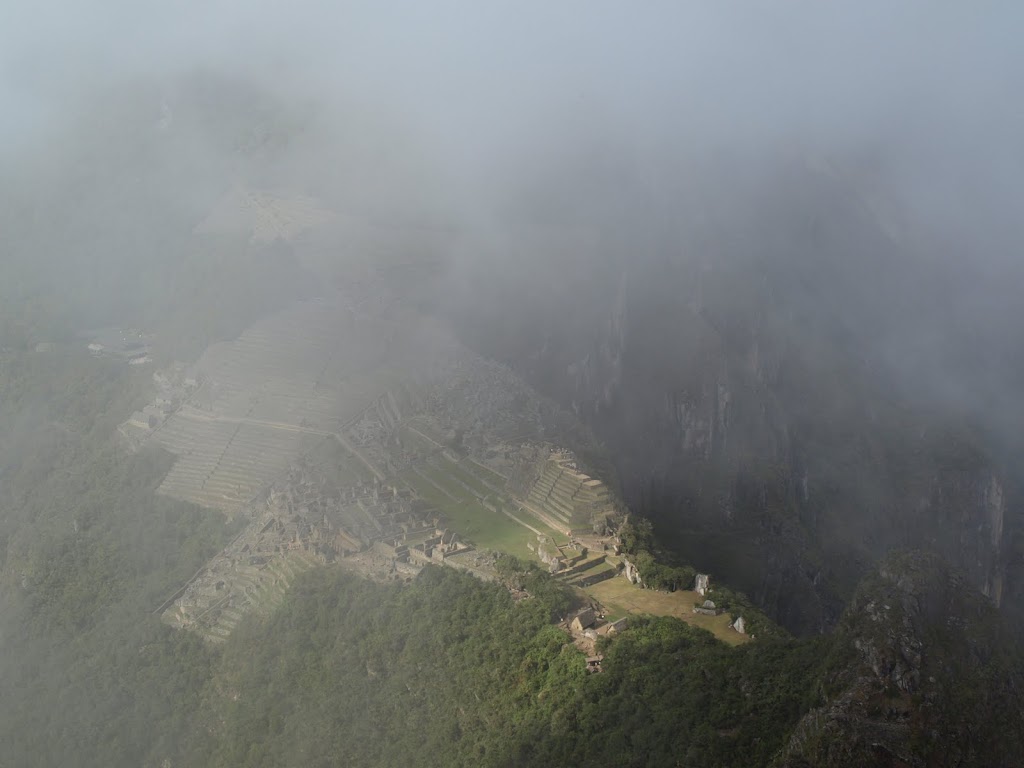 Worth all the trouble

1. Don’t take a tour from Cusco

Flora and I booked a tour that took us in Minibus to Hydroelectrica (7 hours) and from there by train to Aguas Calientes (about 1 hour) where we stayed for a night before going up to Machu Picchu the next day. Food, transport (from and back to our hostel), accommodation and entrance to the site were included. We paid $100 each and everything should have been that much easier that if doing it on our own. Well, it wasn’t.

It all started with the minibus not finding our hostel. At 8 (instead of 7.30) a woman eventually arrived and took us in a cab to the bus. We waited another 30 minutes before the bus with a group of 15 (instead of the promised 8) people left Cusco. The ride to Aguas Calientes was long, but worth seeing. After driving up endless serpentines and crossing a 4300m high pass tellingly called Zona de Neblina the scenery outside turned more and more tropical. The last three or four hours was unpaved roads, very similar to the ones in Bolivia I’ve already described earlier. The ride got rougher and rougher and at Camino del Inca a narrow road (used by buses and trucks in both directions) led between a rock-wall and a deep fall into a river-valley the final kilometers to Hydroelectrica. The food was, well, touristy at best, we ate at restaurants we would have never visited on our own and the breakfast consisted of a little plastic bag with one bread, one banana, one pack of juice and one pack of cookies. But the worst part of the tour was the local guide, a complete asshole that treated us like little kids while never giving us enough information.

2. Spend as little time as possible in Aguas Calientes.

Aguas Calientes is an absolutely horrible tourist town. I didn’t see a single building that hasn’t something to do with tourism. Restaurant next to hostels with internet-cafes and tourist shops in between. Music-bands in the streets that for the first time look like those in European inner cities. And play the same cliché-songs. Absolutely nothing feels right here. The only thing you could do in this town is getting pissed. But that would interfere with the next two lessons. Therefore try not to spend any time there. The best way for me would be camping out of town, although I have to admit I haven’t tried it. But there is a camping-ground and everything is better than that town.

3. Buy as little as possible in Aguas Calientes.

This town is not only ugly but also completely overpriced. The prices are comparable to those of Europe and are therefore way higher than everything else I’ve seen in South America so far.

We got up at three and left our hostel around 3:20. That was early enough to have an early start and when I arrived at the gates of Machu Picchu at 4:35 I was the third in line. When Flora arrived some 40 minutes later there was already a long line. The gates open at six so you’ll have enough time so meet some new people. I walked most of the time with a girl from London and a guy from Israel. 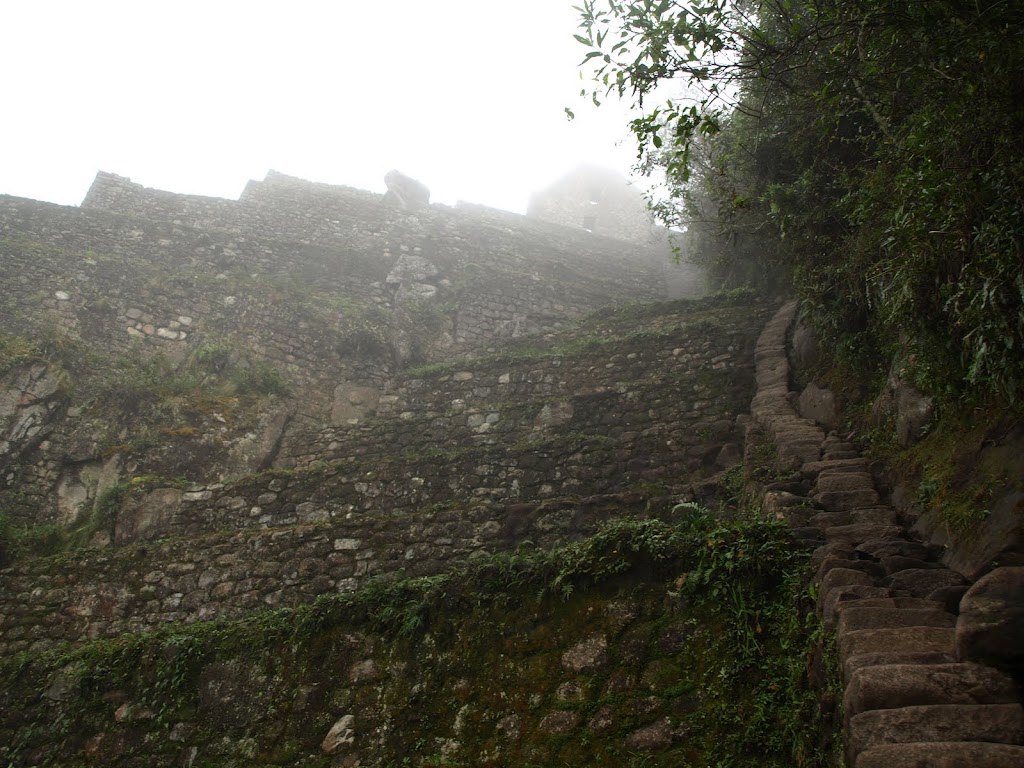 Be fast and you'll have the place to yourself

It’s hot. And humid. Although it’s winter right now you have temperatures like European summer. Even at night. Flora and I came from Andean North and expected cold nights (and therefore mornings)… The thermo-underwear in my bag was completely unnecessary.

To really get the whole of Machu Picchu you will have to walk. A lot. You can take the bus from Aguas Calientes, but I think it’s only half the experience without walking for at least an hour (400 meter difference in altitude) in the dark up the steep steps. And you just have to walk up Wayna Picchu. But even for just walking around the ruins good shoes are essential.

Walking plus hot and humid, you’ll understand that lesson. Seriously, bring water! At least from Aguas Calientes but following the third lesson even better from Cusco. In the restaurant at the entrance of Machu Picchu 300ml cost you eight Solis. That’s exactly 8 times the price of 600ml in Cusco. And you will need at least two liters for the day. But bring only a small backpack, nothing over 20 liter is allowed to enter the site. But you don’t want to carry a lot anyway.

If possible take two days to visit Machu Picchu. With our great tour we had to be back down in Aguas Calientes at 12 (where our great guide waited in the wrong restaurant to give us our train-tickets) and there are two things you want to do. Walk up 2667m high Wayna Picchu, the mountain behind Machu Picchu (from the classical picture-view), and walk around the ruins of Machu Picchu with as least people as possible. Wayna Picchu offers an amazing 360-degree view at Machu Picchu at one and the jungle on the other side. There are only two times to start walking up, seven and ten, and only 200 people are allowed in each time. You can’t make it back down to Aguas Calientes if you go at ten so we had to go at seven. That meant missing the best time to walk around Machu Picchu (and the guided tour), before most of the tourists arrive.

So the ideal way would be spending two days up there, the first day on the peak of Wayna Picchu (watching how the fog dissolves more and more and finally getting the perfect view around is simply amazing) and the second walking around the almost empty, foggy ruins of Machu Picchu in the morning before leaving at noon to catch the train and/or bus back to Cusco. That way you will also get one sunset up there. 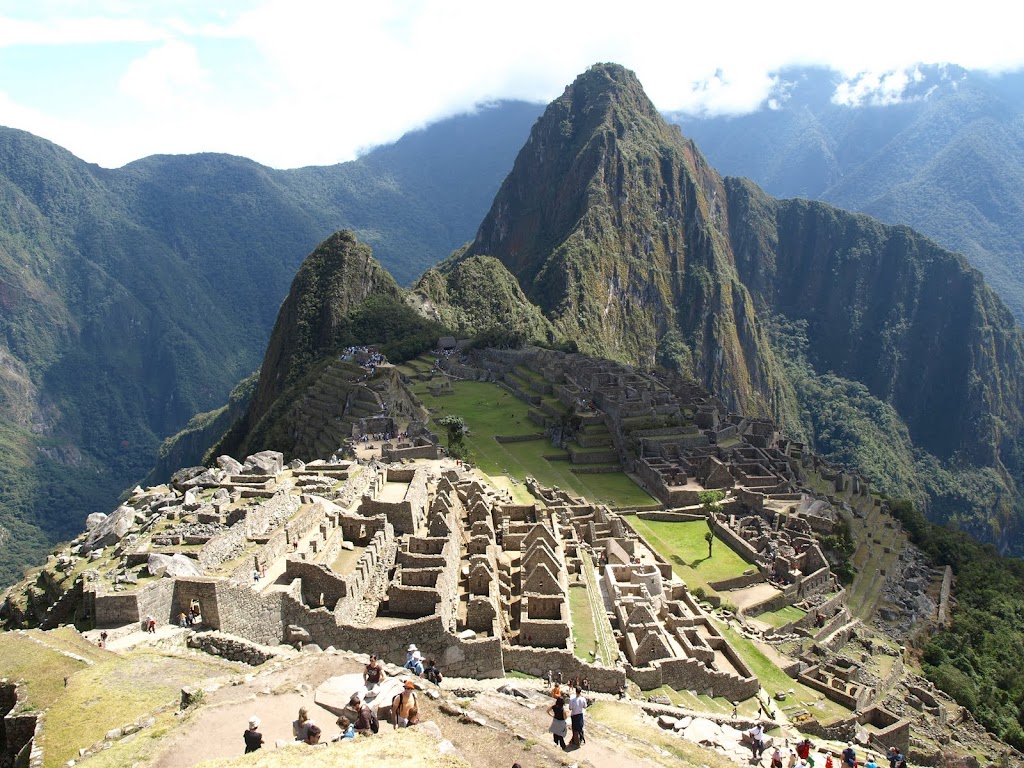 Not an original perspective, but...

I was told the baggage-deposit opens at six, the same time when all the people rush in to be the first in line for Wayna Picchu and as I was up there third that would have meant loosing my pole-position. So I sneaked my bag into the baggage room when no one was looking. I didn’t get a receipt for my bag but I still had no problem to get it back. Also the guy at Wayna Picchu told us that we had wait for an hour (Machu Picchu opens at six, Wayna Picchu at seven) in line to get in, but after they marked our tickets I had 20 minutes to run around the foggy ruins and I’m glad I didn’t miss that.

Seriously! I can’t understand how people can leave stuff in such a place. So I had to put that in here. I saw tissues and paper, even a box of baby diapers. You don’t want to carry around a lot anyway so it’s really not a problem, just take everything you bring up there back down with you.

According to our guide-book the whole think slides down one centimeter every month. And they are building a teleferic from Aguas Calientes to Machu Picchu to carry up even more tourists. So who knows for how long it will still be accessible.

The tour Flora and I took was crap, but Machu Picchu is on of the most amazing places in the world. You can, and I would love to, spend days up there. So go DIY and even if it’s a little bit more expensive, you won’t regret it…

P.S.: Even if you end up with a tour, no matter how crappy it is (and ours was really, really crappy), Machu Picchu will still compensate you for everything. Click on More pictures if you need more convincing.
This entry was posted in South America, Travels. Bookmark the permalink.