While having dinner with the two Spaniards another couple joined us in the tiny kitchen of the hostel in Valle Fertil. Two Argentinians from Mar del Plata, south of Buenos Aires, had visited the Valle de la Luna on the same day and, like us, planned to leave the next morning. The two Spanish speaking couples chatted away, sometimes trying to translate the funniest bits for me. But it wasn’t until the Spaniards left that I really come to talk. 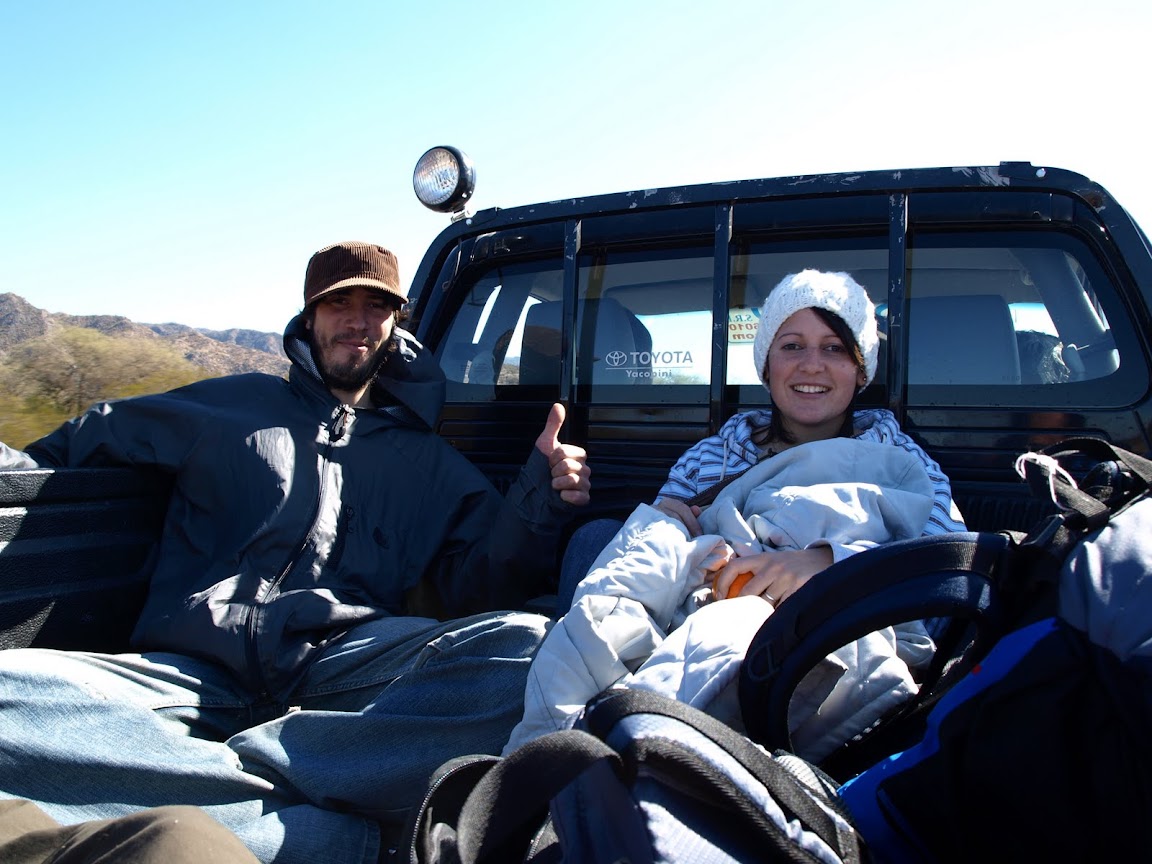 Pablo, a travel and hitch-hiking expert – he has thumbed his way through Europe – quickly altered my plans for the next day, when telling me to go to La Rioja instead of back to San Juan for the bus to Salta. His girlfriend studied to become an English teacher and wasn’t too excited about the whole idea of hitch-hiking. Both of them should adopt me for the next day, introducing me to local specialities (like some very tasty pastries called Bastelitos) and teaching me important phrases like ‘Awisame Salta, por favor’ (which allegedly makes bus drivers tell me where to get off).

Together we unsuccesfully tried to find a bus or car to take us to 50km away Baldecitos and eventually decided to try hitch-hiking. Two or three hours later (luckily it was another great day, weatherwise), after spending our time with stone collecting, juggling, balancing on the barrier at the side of the road and for myself barking a little stick (I still have it), we finally found a pick-up that took us as close as three km to our bus stop. We came there early and had time for a lunch break (of course I wasn’t prepared, but they were and supported me with a sandwich) at the side of the road. We also bonded with two dogs, a straydog who was more interested in our bread than us and the pet of some ladies waiting for the same bus, who was really keen on getting close to me. A day later in Salta I still smelled like him and had to wash all my clothes (well it certainly was time for that anyway). In the bus my neighbour, a 24-year-old law student started talking to me, telling me about his beautiful girlfriend (to whom I was later introduced) and, after I told him about my studies, his father, the second-term mayor of his hometown, a little village in the west of the Valle de la Luna.

In La Rioja I had to say good-bye to all of them, was invited to Mar del Plata and invited them to Vienna (with Pablo I think there really is a chance to see him there). Little later I sat in the bus to Salta where a day later I finally met Flora.

Riding the bus through Argentina

In Argentina I almost solely rely on the bus to cover the huge distances. I travelled over 4000km and countless hours, mostly over night in the buses of at least six different companies (hence the time to write all this stuff). From Buenos Aires I went south to the Peninsula Valdez, crossed the country to Bariloche in the west and went back up north to Mendoza. After the short intermezzo in Uspallata I went further up north to San Juan, the Valle de la Luna and then over La Rioja to Salta. Now I’m sitting in the bus (of yet another company) to Purmamarca and we’re planning to cross Bolivia to visit the Machu Pichu (are you reading this Tamara?), then back through Bolivia and Paraguay to Iguazu at the border between Argentina and Brasil, further down south to Montevideo in Urugay. From there we will cross the Rio de la Plata to Buenos Aires (at least that’s the plan now).

The buses in Argentina are cheap (for us Europeans) and most routes offer different classes. From simple semi-cama with only snacks and half-reclinable seats (my preferred choice of travelling) to ejecutivo with full meals and fully-reclinable seats. Most of the buses feature high entertainment, the selection of movies I saw is more than widespread. Everything from horror (Alien vs. Predator) to comedy (Ice Age 2), action (Casino Royale), western (No Country for Old Men) and some sentimental movies (some girl-and-horse-movie called Flicka). Most of them in Spanish with English subtitles, some the other way round and just a few only in Spanish.

Good for me, after two overnight trips in a row I even learned to sleep in those buses. Now I’m a huge fan. Semi-cama all the way!!
This entry was posted in South America, Travels. Bookmark the permalink.